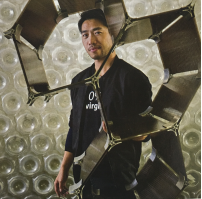 Arthur Huang’s dreams are made of garbage. His latest? “A piece of trash that’s going too fly,” he says.

Huang’s dream tend to become reality. This one is parked in his company in Taiwan, and it’s called the EcoFighter-a two-seated aircraft with wings made of the material from recycled plastic bottles.

As a young architecture student, Huang grew disillusioned that despite all the talk of “going green,” it seemed no one was producing 100 percent sustainable materials. He decided to invent them himself. It wasn’t easy, He had to build his own manufacturing machinery, because the recycled materials broke existing equipment. But now his firm, Miniwiz, which he founded in 2005, transforms discarded plastic, clothing, and rice fiber into useful and beautiful things. Huang

has opened “trash concept ‘stores for Nike, built a nine-story pavilion in Taipei, and collaborated with Italian furniture designers to re-create their classic pieces using boards made from cigarette butts. “We’re trying to sell the trash back to people who produce it” he explains.

a piece of trash 一块垃圾